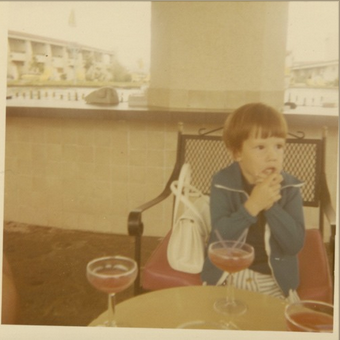 At the age of 5, writer and comedic storyteller Jamie Brickhouse became obsessed with Peggy Lee and her song about escapism by means of “breaking out the booze and having a ball.” The song served as Jamie’s guide to several nights of debauchery while living in New York City. But things changed dramatically the night he drunk dialed the dazzling pop icon.

Jamie Brickhouse is a writer and comedic storyteller. He is the author of the critically-acclaimed memoir Dangerous When Wet: Booze, Sex, and My Mother. Jamie will perform his solo show based on the book and directed by Obie-winning David Drake at the 2017 FRIGID Festival at the Kraine Theater in New York on Feb. 23, 26, 27, 28, and March 4th. Go to www.FRIGIDnewyork.info for tickets.

He is a two-time Moth StorySLAM winner, Literary Death Match champion, has recorded voice-overs for the legendary TV show Beavis and Butthead, and has performed at multiple storytelling shows including Kevin Allison’s Risk! Jamie has been published in the New York Times, International Herald Tribune, Washington Post, Daily Beast, Salon, Out, The Huffington Post, and is a guest blogger for POZ. Friend him on Facebook, follow him on Twitter @jamiebrickhouse, visit him at jamiebrickhouse.com.

Five Fun Facts About Peggy Lee’s “Is That All There Is?”

1. It’s true – Jamie definitely drunk dialed Peggy Lee to gush about his fondness for the song, sometime in the mid-90s, with the help of his friend Mr. Parker who got her number! (You’ll have to listen to the story to hear how that all went.) At that time, she was still performing in her 70s, sometimes in a wheelchair.

2. When you take a look at who was involved in making “Is That All There Is?” you’d also think it was born to be a hit. It was originally written by the legendary songwriting team Leiber and Stoller. They took inspiration from Thomas Mann’s story Disillusionment, who Leiber’s wife introduced him to. Many of the words in the song’s chorus are taken straight from Mann’s story. And Randy Newman composed the backing orchestral arrangement.

3. The song passed hands before it made its way to Peggy. English singer and actress Georgia Brown first performed it during a TV special in 1967. Then the one and only Leslie Uggams made the first official recording in 1968. It became a hit once it reached Peggy. Guy Lombardo and Tony Bennett recorded their own versions the following year.

4. Peggy’s version reaching #11 on the U.S. pop singles chart in 1969, becoming her first top 40 hit since the release of “Fever” 11 years prior. It also won Lee the Grammy for Best Female Pop Vocal Performance, and is now enshrined in the Grammy Hall of Fame.

5. “Is That All There Is?” has been covered by a wide range of artists, including Chaka Khan, P.J. Harvey, and Bette Midler.

Got a story about a song that’s changes your life? Tell us — just drop a line at playitbackradio@gmail.com. And subscribe to us on Apple Podcasts  to hear old, current, and upcoming content from musicians, creatives, and industry heavies sharing their personal stories about songs and pieces of music that are special to them. Your ratings and comments help us give us what you want, so say anything! Like us on Facebook and follow our Twitter feed, too.